The Divine Gift of Femininity 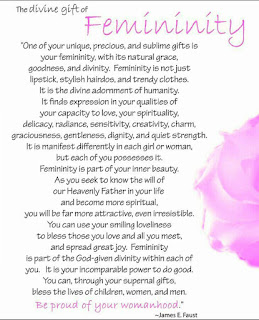 The divine gift of being feminine is inherent by nature, it’s in a woman’s biology. While we all take on our individuality and choose our path, the one thing women should not lose track of is the beauty that comes with feminism. When I say feminism I do not mean the movement to remove all that makes a women unique from men but the natural gift of being feminine. The natural gift to nurture, mother, protect, feed and care for all beings around us. The ability to put the needs of others in front of our own. The ability to entice a man with a beautiful smile, a sweet scent and a pretty dress.  One of things that my mother tried her hardest to bestow upon me was etiquette and being a lady. The modesty part was lost on me because I love being nude and find the body to be an art form but what wasn’t lost on me was the beauty of a women being a women and a man being a man.  I love cooking for a man and serving him the meal. I love setting a table to perfection. I love having a man open a door for me or lend me his hand while stepping out of a car. Nothing is more wonderful than a man gathering the hiking equipment while I make the picnic. It feels good to be in that space as a woman. There is a fluid exchange between the two genders that if left to nature will always endure any movement.

Unfortunately women and feminism are under attack.  I remember when it was a big deal for a women to be a kicker on a men’s football team. Why? Because no matter what anyone proclaims men and women are not biological and structurally the same. A women’s body is built to bare children and a men’s body is built to protect, hunt and build. It’s not to say that a women can’t protect, hunt or build but there is in nature a difference in capabilities between a 5’2 woman and 6’ man.  While the man will never ever be able to carry and birth a baby, he will always be capable of lifting more than that 5’2 woman, why, because men and women were not meant to be biologically or structurally equal and that’s perfectly fine. It needs to be accepted. An apple can never be an Orange, even if you paint that orange red. We can call it an apple all we want but a rational mind knows the facts. The feminist movement I believe in doesn’t fight biology but fights actual discrimination against women, like firing or not hiring a women because she wants to bare children. If she’s capable of doing her job aside from maternity leave then what’s the problem!?  That issue simply doesn’t exist anymore. So what are they fighting for?

What I do see is a huge problem in the feminist movement that wants to take away my rights as a biological woman to give trans women the equal rights to compete against biological women in the name of equality because it’s taking away women’s rights to compete against people who have the same biological capabilities as them.  It’s not equality, it’s injustice against women and in all honesty a mental health issue.  If men and women were biologically comparable to each other then why have men and women teams, why not merge the NBA to one league... how many women would be able to play? Not many because they aren’t biologically capable. It seems backwards to me to see trans women take on the feminine role and learn female etiquette and want by all means to be viewed as a woman but in the same breath want you to completely ignore the facts that make them biologically male, no matter what which means they will always have certain capabilities above the capabilities of a biological woman.  You can not change science to serve your agenda, which seems to involve convincing women it’s against the feminist movement to be feminine and embrace who you are biologically and build on that to be who or how you want to be without imposing on the rights of others.

I will always instill in my child the inherent gender roles so that she understands her biology. How she chooses to break out of those roles is up to her but at her very core she will understand the beauty of what makes a woman a woman and what makes a man a man and how it’s up to her to be polite and respectful while stepping out of the box to achieve her goals as a person capable of anything. I have always succeeded in male driven industries because I brought something unique to the picture and used my strengths to achieve my goals without pulling a woman card because if you want to be treated with respect you do your job to the best of your capabilities as a person and you will succeed 99% of the time because the world is not set up to keep women down but the current feminist movement does just that. 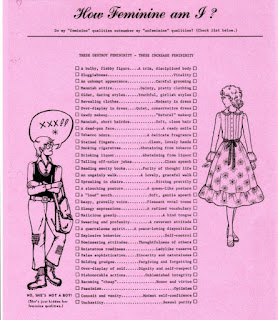 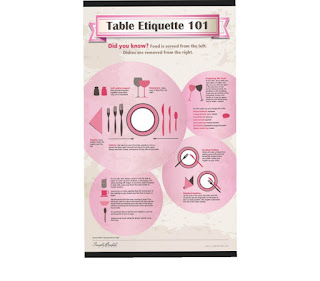